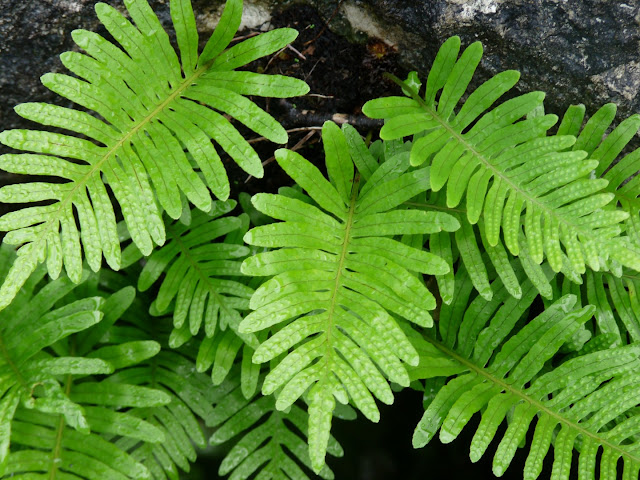 Shows photos of: early day Croziers, Views of all three specimens (1, 2 and 3) eg: 1 population down grike and the other two populations are both on top of a boulders, one in canopied woodland whilst the other out in the open. Also showing a photo of spent ferns from May.

Shows photos and known history of both Holly Fern No.1 and Holly Fern No.2 - Also a short article on how the Fern was re-discovered almost 60 years later. Also a link to watch the BBC News item on the finding of the Holly Fern.

To the best of my knowledge we have not yet discovered the rare 'illyricum' hybrid on Hutton Roof, although there is every possibility we might one day, so I have put some details and photos on the site to describe the rarity in the event.

Pteridium aquillinum (Bracken or Brake)
Posted by Bryan Yorke at 3:26 AM If you want to contact me via email my address is: bryan.yorke@sky.com I will always try and reply within 24 hours.

My Other Nature Blogs

You might also wish to check out my other "nature" blogs which you can reach by clicking on the following links:
EPIPACTIS ATRORUBENS AND MORE - A lovely blog of my studies into this rare wild orchid along with interesting photos and information on its hybrids and many varieties.
THE FLORA OF HUTTON ROOF (under construction) This is a descriptive blog to try and help with identifications etc. It also highlights photos of flora actual seen and recorded within the Hutton Roof confines and includes some of my notes on the species. It is a casual site and currently under construction. I have started off the site with the more rarer items.
I LOVE ARNSIDE AND SILVERDALE - My general day to day nature finds with lots of photos of mine (and my kind contributors) to the Blog - its very casual and covers a large area but in the main (HUTTON ROOF).
NATURE, POETRY, SKETCHES, AND THE REST - This is a lovely blog containing my poetry, sketches, and my artistic side. - again its very casual and can be entertaining.
HUTTON ROOF NATURE SPECIALS AND UNUSUALS - This is a lovely blog were I have been able to store some of my unusuals which you do get from time to time eg: strange shaped trees and flowers and boulders with resemblance etc. It is only in the build stages at present but being added to on a almost daily basis